In this post we’ll be looking at how Seed can speed up the deployment time of your Serverless app by 100x. It’ll bring into focus all the improvements that we’ve rolled out over the past couple of months. 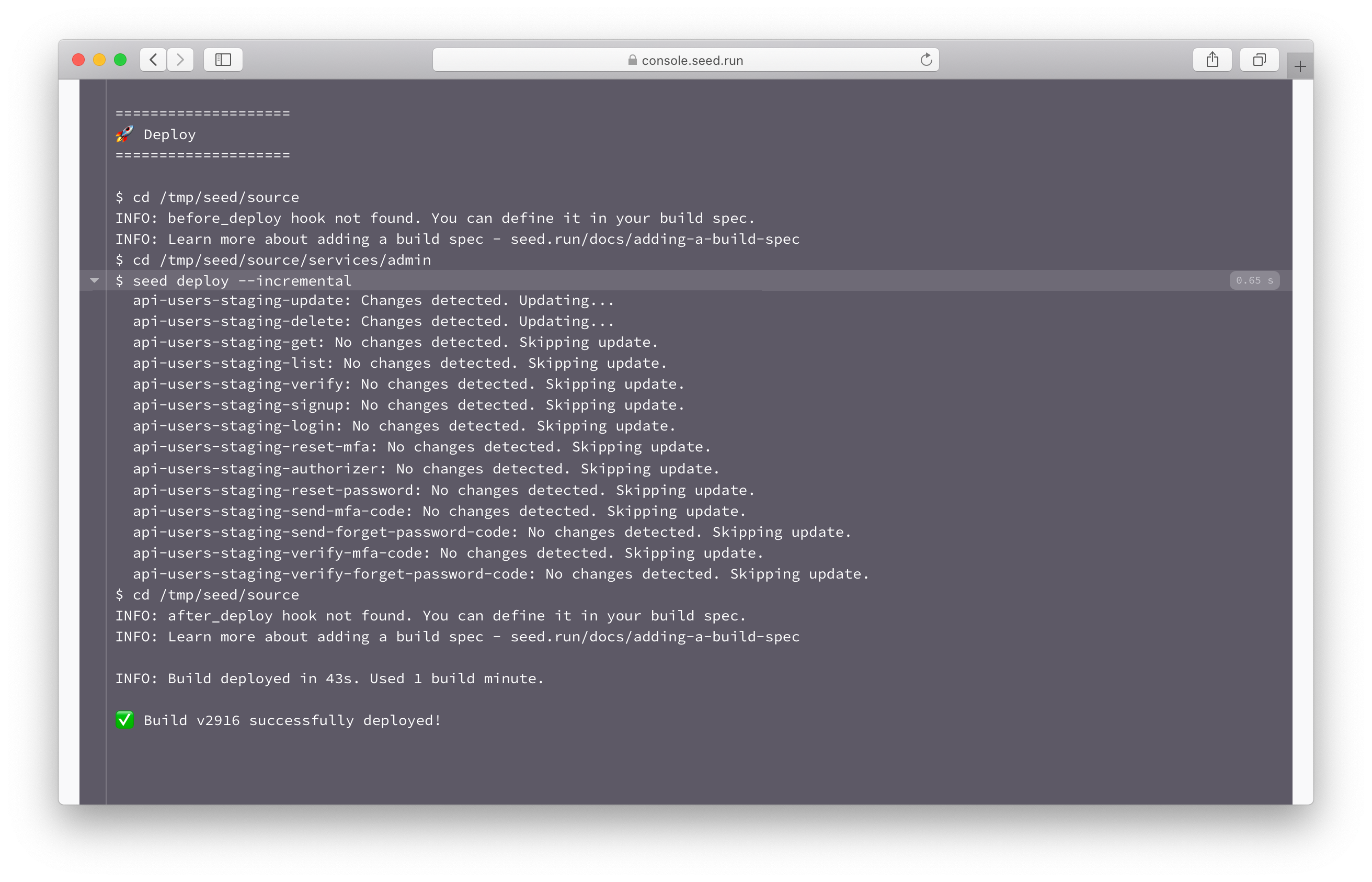 Serverless Framework apps, as you may know are made up of individual services. Each service is a CloudFormation stack that’s deployed to AWS. Most real-world apps have:

Typically, most teams start off using a service like Travis CI or CircleCI to deploy their app. They’ll use a simple build script that loops through all the services in the app and deploys them one after the other.

The real fix here is to deploy all your services concurrently. But you’ll need to worry about a couple of things:

To handle these cases, you can imagine your build scripts will start to get a lot more complicated. It’s common for folks to have build scripts that are 500-1000 lines long. At some point these scripts start to become unmaintainable.

Seed on the other hand deploys all your services concurrently and reliably. All without a build spec. And you can also configure Deploy Phases to specify the order in which your services need to be deployed. 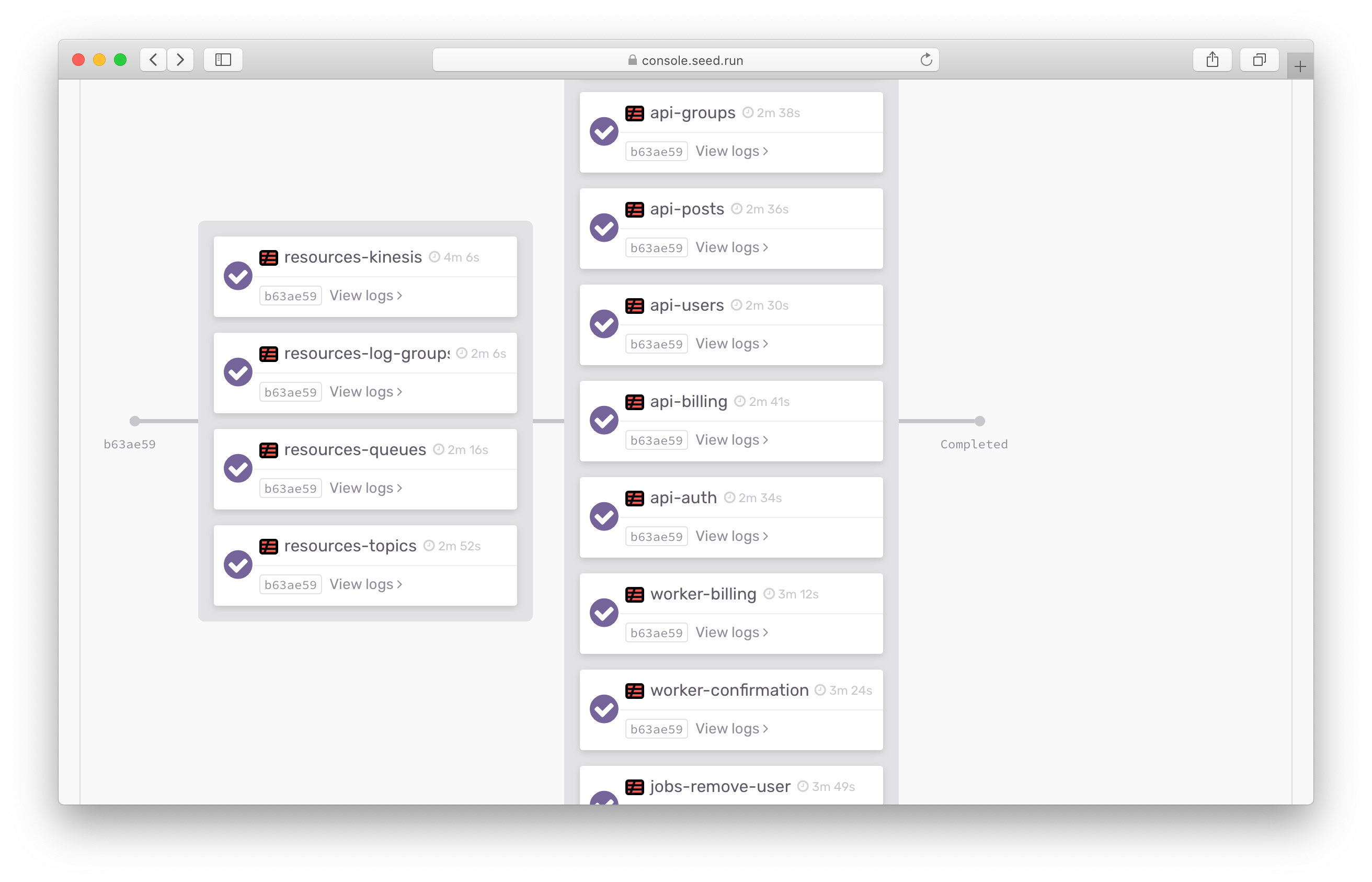 In the example above, we’ve got an app with 30 services deployed in 2 phases. The deployment time is now down to roughly 8 mins.

So far, so good. Now let’s get to the fun stuff.

The real fun begins when you make a change and have Seed deploy it. 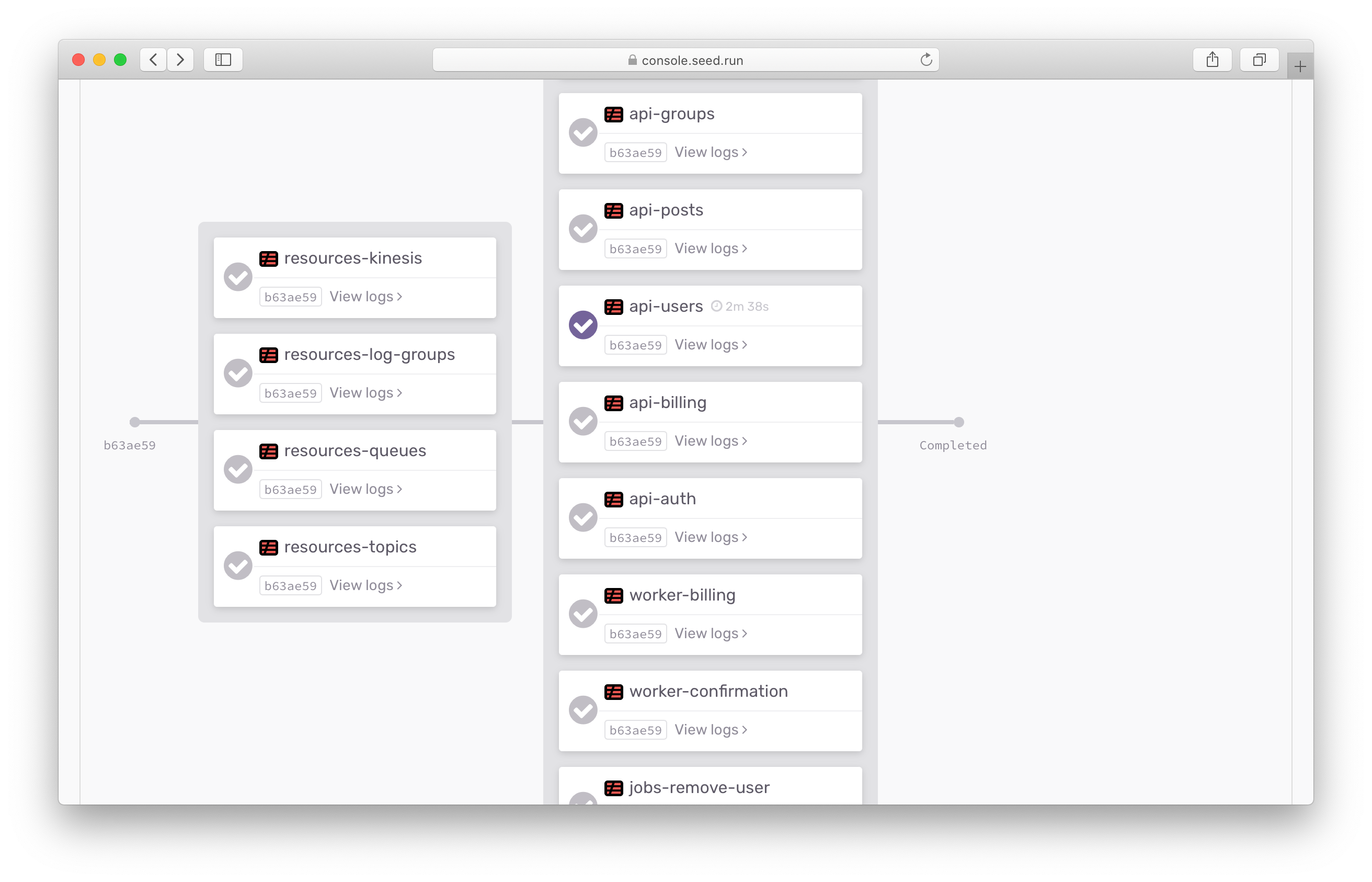 Here we are making a change to one of our services. And you’ll notice that Seed automatically skips all the other services.

This is thanks to Incremental Service Deploys. Seed by default looks at the Git log to figure out if a change has been made in a specific service.

The custom infrastructure that we’ve built at Seed is optimized to the point that it doesn’t even need to run a build job to skip a certain service. We use a large number of concurrent background jobs to check if a service needs to be deployed, while the build container for that service is being initialized!

Note that, our build machines are optimized to get started as fast as possible. Usually in around 3-5 secs, thanks to our recently released Second Generation Machines.

Now let’s step inside the build of a service that was updated. 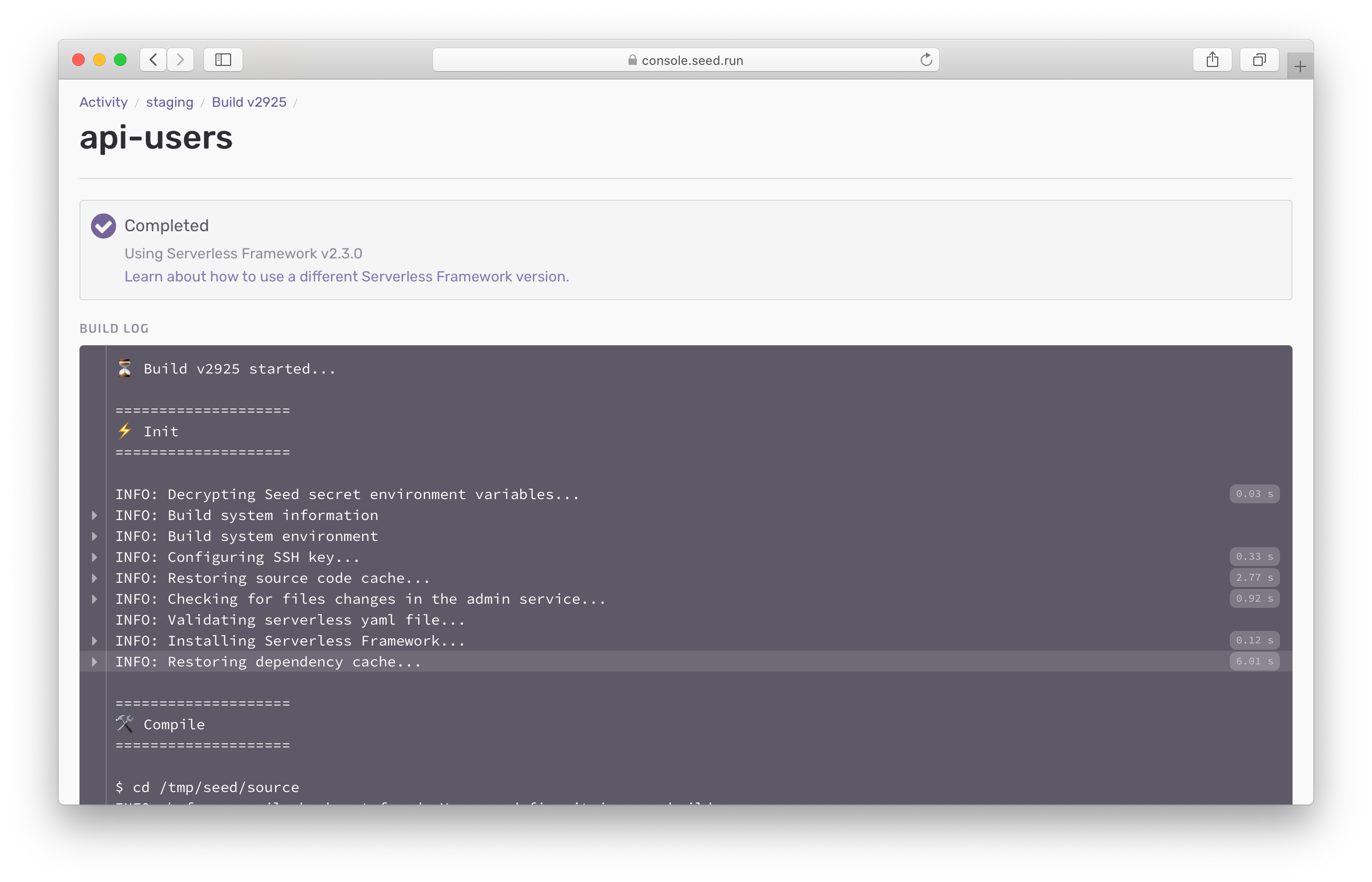 The app we are deploying has a node_modules/ directory that’s 1GB in size. Seed does a couple of optimizations in the background to ensure that this is downloaded and unzipped as fast as possible. It also intelligently speeds up the actual npm install step.

Note that, this is supported for monorepo apps and Yarn Workspaces as well.

Once the service has been packaged, Seed does a quick check to:

Once Seed figures out which Lambda functions need to be deployed, it’ll call AWS directly and update them. And it does this concurrently. All without doing a CloudFormation update. The result is an update that takes 0.65 secs.

This is all thanks to what we call Incremental Lambda Deploys. And the Serverless Seed plugin.

The entire deployment process took around 50 seconds. That’s deploying 30 separate Serverless services in under a minute! As opposed to the initial almost 90 minutes. An improvement of 100x!

Now if you’re like us, you’re probably asking yourself; where was all that 50 secs spent? It turns out, that Seed has optimized every single step, aside from the serverless package command.

In our case we are using Webpack to individually package our Lambda functions. We are using the serverless-bundle plugin.

To speed this up, we can use esbuild instead of Webpack. Using the serverless-esbuild plugin, you’ll notice that it’s about 10x faster than Webpack. It’s not as full featured as Webpack but depending on your app, you might be able to use it as is.

We can also kick things up a notch by using a more powerful machine.

Now our incremental deploys should take only 15 seconds!

The above optimizations are a culmination of efforts over the last couple of months. Seed’s custom infrastructure can now deploy your Serverless apps 100x faster. Fixing one of the biggest issues of using Serverless at scale.

To quickly recap, Seed can now:

And just as a reminder, Seed charges you based on the build minutes you use. So if your deployments are 100x faster, imagine how that’ll impact your usage!

All these changes are available to all our Seed users, all across our pricing plans. We can’t wait for you to try it!

If you are not currently using Seed and are figuring out how to; feel free to get in touch with us. Our team will be more than happy to get you started.