While Seed does not need a build spec to configure your pipelines or your project, there are cases where you need to run some scripts during the build process. You can get a sense of the different build steps by looking at one of your build logs. 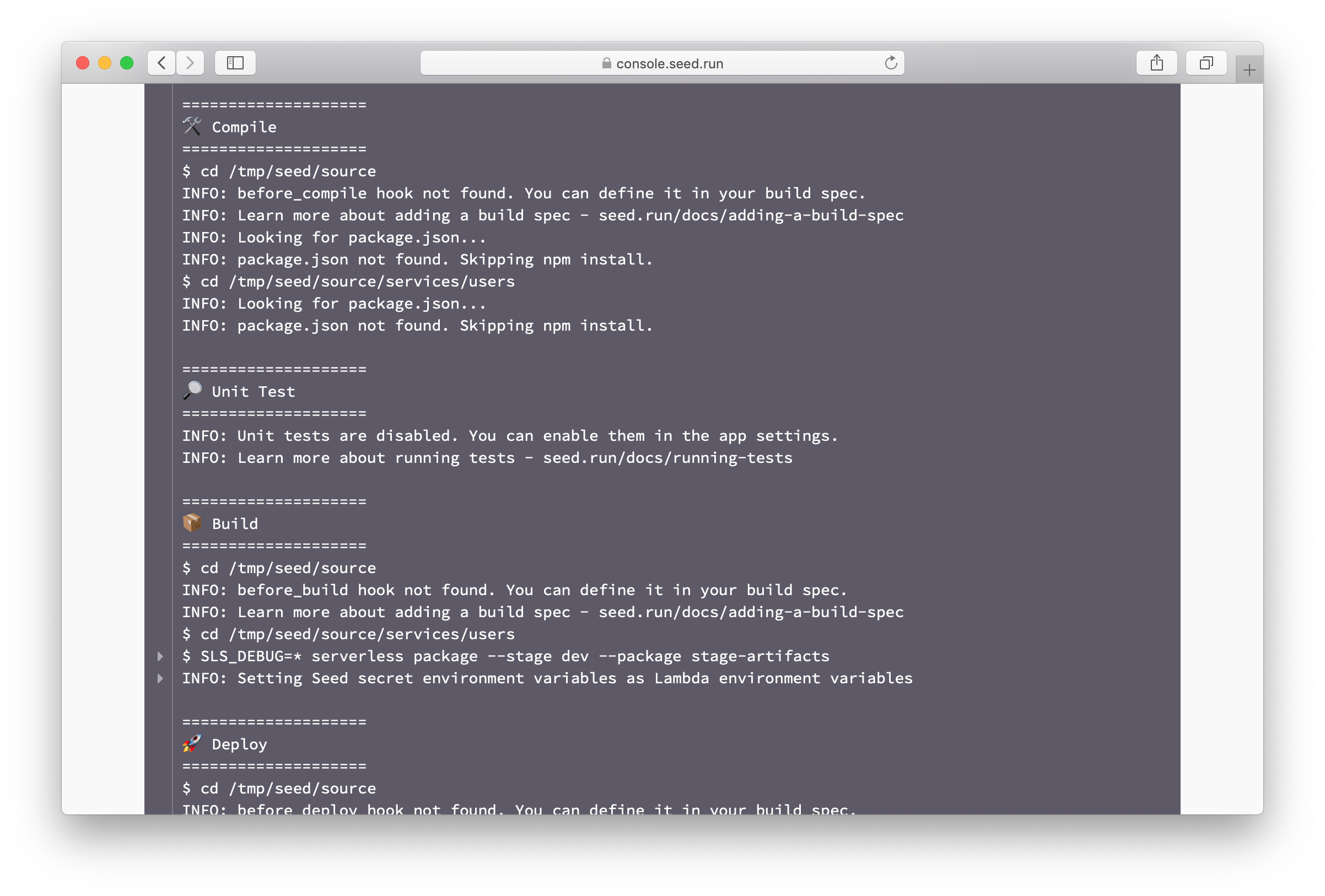 To hook into the build process, add a seed.yml in the root of your project directory. Here is the basic skeleton of our build spec.

A couple of things to keep in mind when adding commands to your build spec.

Below is a brief description of the build steps.

Apart from the build hooks, there are a couple of other options that can help you customize the Seed build process.

Seed by default checks the Git log to see if a service has been updated, before deploying it. You can read more about this in our Deploying Monorepo Apps chapter.

Add the following to either, disable this check:

Use the Lerna algorithm:

Or use the pnpm algorithm instead:

Similarly, you can filter by target branches.

The stage name is central to the way Seed manages deployments and resources for your Serverless app. It is either specified manually or Seed automatically generates it based on the auto-deployed branch. If it’s being generated, Seed will sanitize the branch names so it works with Serverless Framework and AWS.

However, there might be rare cases where you might wish to customize the automatically generated stage names. To do so, specify a bash command using the stage_name_constructor option. Note that:

Let’s look at an example. Say your feature branches have the naming convention feature/feature-name. However, you want the stage names to be feature-name. And you don’t want to transform some specific branch names. Add the following to your seed.yml.

Seed by default generates some build artifacts for downstream stages. These artifacts are used to generate CloudFormation change sets when promoting. You have the option to disable generating these artifacts if you are not promoting builds across stages. You can read more about this in our Promoting to Production chapter.

Add the following to your seed.yml to disable generating artifacts.

For example, let’s take a build URL in the console:

Environment variables that are set in the build spec do not persist across commands. This means that in the following build spec, $MY_VAR will not be printed out.

So a variation of the above with $BASH_ENV looks like this:

In this case $MY_VAR is loaded from $BASH_ENV and should be printed out correctly.

The scripts in your build spec are run in an environment that are using your AWS IAM credentials. This means that you can directly use any AWS commands in your script using the AWS CLI without having to configure it.

Here are a couple of examples of what you could do in a build spec.

The Build images come loaded with n. This allows you to select the specific version of Node.js you want.

You can install the version of npm you want in the same way. For example, if you wanted to use the latest version of npm, add the following.

The Build images come loaded with goenv. This allows you to select the specific version of Go you want.

Update Pip to the latest version.

Alternatively, you can select the specific version of Pip you want.

The Build images come loaded with env tool for .NET. This allows you to select the specific version of .NET you want.

Navigate to the service path

By default, the commands in the build spec are executed at the repo root. To change the working directory to the service, use the $SEED_SERVICE_FULLPATH environment variable.

Run a script after deploy only in prod

Run a script after deploying a specific service

And if you wanted to combine two conditions you can do:

If you need to start a PostgreSQL server locally for tests.

If you want to invoke a Lambda function as a part of your build process.

This works because the AWS CLI is available and configured with the IAM credentials of the stage.

Note that, we are not using the serverless invoke command here. This is because there is a known issue with Serverless Framework; the command hangs in CI environments.

If you want to use a CloudFormation output from a different stack use the following.

This’ll use the AWS CLI to get the information of my-stack; parse the output for the value of OutputKey MY_KEY; and then export the value as the $MY_KEY environment variable. Then you’ll be able to reference this value in your serverless.yml as ${env:MY_KEY}.

If you are trying to get the outputs for a stack that’s in a different region than the currently deployed stage, use the --region option in the AWS CLI.

You’ll need to enable Docker to use it in your build spec. Head over to our chapter on running Docker commands on how to do this.